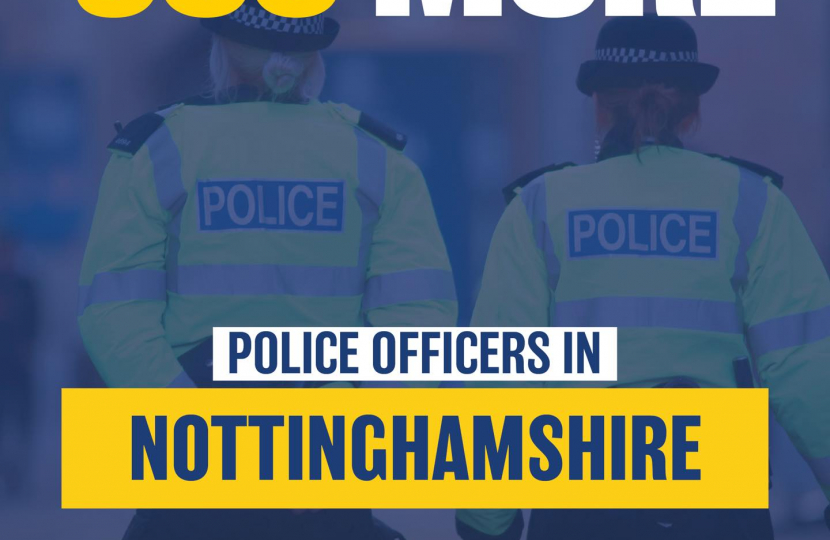 Tom Randall MP has welcomed the announcement that an additional 380 police officers have been recruited in Nottinghamshire since September 2019.

The latest figures are part of the Conservative Government’s drive to get 20,000 more police officers on the street by March 2023, and puts the Government on track to fulfil its manifesto commitment with 77 per cent of the target now met.

Across the 43 police forces, an additional 15,343 officers have been recruited – tackling crime and keeping communities safe across the country.

The latest figures also show that the police are more representative of the communities they serve. There are now more female police officers than since records began with over 50,000 women in forces across England and Wales. Of the recruits hired since April 2020, 42.5 per cent are women.

The 15,343 extra officers will support the Conservative Government’s crack down on crime, which has seen the launch of the Beating Crime Plan and the passing of the Police, Crime, Sentencing and Courts Act – reducing crime, protecting victims, and making the country safer.

“I work closely with Nottinghamshire Police and I know how hard they work every day to keep the streets of Gedling safe.

“An additional 380 police officers on our streets will play a huge role in pursing criminals, keeping neighbourhoods safe, protecting victims, and reassuring the law-abiding majority.

“This Conservative Government is delivering on its promises to the British people – showing it is only the Conservatives that can be trusted to keep Britain’s streets safe.”

“As Home Secretary my first priority is to protect the British public from harm and I am absolutely steadfast in my determination to drive down crime.

“That’s why I am delighted the government is on track to deliver 20,000 additional police officers by March 2023, with 15,343 already recruited to bring criminals to justice.

“This is a once-in-a-generation opportunity for forces to become more representative of the communities they serve and I am heartened to see there are now over 50,000 women in forces across England and Wales for the first time.

“With the extra officers recruited I want to continue to see forces doubling down on tackling murder, serious violence and neighbourhood crimes which tear communities apart.”