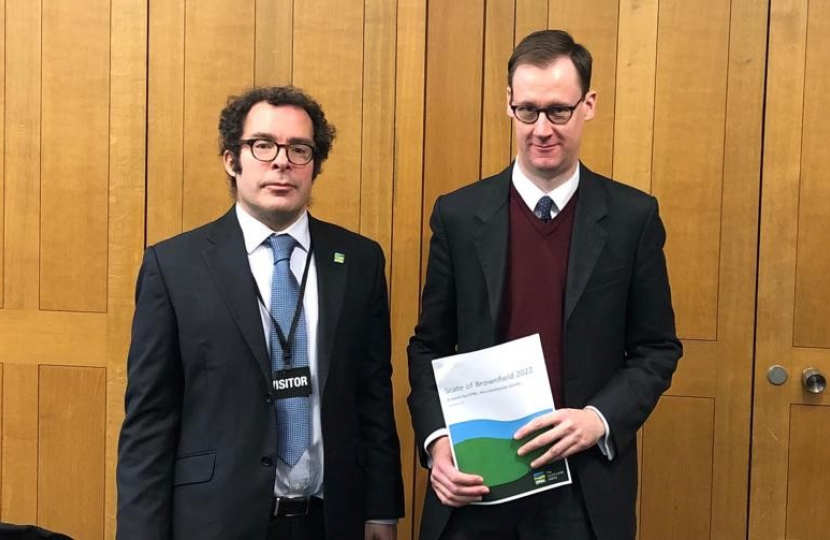 Following the publication of the State of Brownfield Report, Gedling Member of Parliament, Tom Randall, has met report author Paul Miner from the Council for the Protection of Rural England to discuss the report and the opportunities for more brownfield development.

Gedling is situated between a historic city and rolling countryside and Tom Randall MP says: “Our green spaces are precious and once they have been built on, they are gone forever. That is why I join with residents in wanting to ensure that our beautiful Green Belt and green spaces surrounding Gedling are protected from housing. It is also important that any new housing is built on brownfield sites and the design of new houses match the surroundings. This is exactly what the Government’s new laws, that I have voted in favour of, will deliver.”

“Brownfield land is land which has been previously developed that is not currently in use. Brownfield land for 1.2 million homes is currently lying dormant and more than half a million homes on brownfield with planning permission are waiting to be built. There are 23,000 brownfield sites identified by local Councils that await development. These sites must be prioritised over our precious Green Belt and green spaces.”

In December 2022, the Conservative Government announced that new laws will be introduced that removes housing targets for Councils, making them advisory. Green Belt protections will also be strengthened as part of the Conservative Government’s ‘Levelling Up & Regeneration Bill’, with new guidance setting out that local Councils are not required to review Green Belt to deliver homes.

Speaking in Westminster after the meeting Tom Randall MP said: “A consultation is now taking place, following December’s announcement on changes to the National Planning Policy Framework, I look forward to working alongside colleagues in Parliament, through a new All-Party Parliamentary Group, to share the views of our residents with the Secretary of State and Ministers.”

Locally, Gedling Borough Council are responsible for decisions relating to house building and planning and, following the Government’s announcement of greater Green Belt protections in December, Tom Randall MP joined with Councillor Sam Smith and Councillor Mike Adams and over 1,000 local residents in successfully calling on the Labour-led Council to u-turn on their plans for building over 600 houses on Stoke Bardolph’s Green Belt.

In addition to the greater protections of our Green Belt and green spaces that the Levelling Up & Regeneration Bill will deliver, the Conservative Government has invited local Councils to bid for a share of £60 million from the Brownfield Land Release Fund 2, which will help to bring neglected urban areas back into use, support regeneration projects and boost local economies. Following this announcement, Tom Randall MP said: “This is another part of the Conservative Government’s plan to prioritise brownfield land for new housing, transforming underused sites into places where people want to live and work, while protecting our cherished green spaces. Should they be eligible for the funding, I encourage Gedling Borough Council to apply for it.”