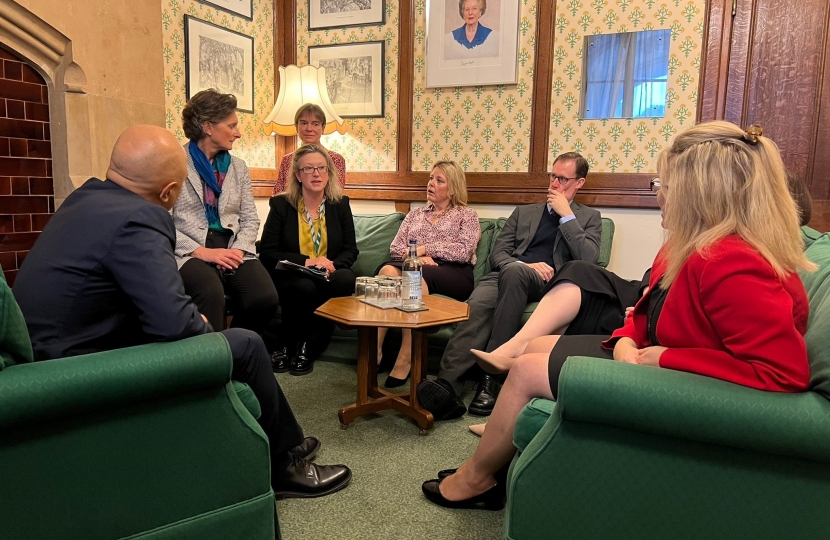 Member of Parliament for Gedling, Tom Randall, has backed changes to prescription charges for Hormone Replacement Therapy (HRT) which will reduce the cost of treatment for women going through the menopause.

Tom was speaking after a parliamentary debate on Friday, 29th October 2021 led by Swansea East MP, Carolyn Harris, who had called for a ‘menopause revolution’.

Tom said: “A number of my constituents have spoken to me about their experiences during the menopause and raised their concerns about the cost of HRT. I was very happy to attend Friday’s debate to support the cause for lower costs.”

Tom, who spoke briefly in the debate, joined other Members of Parliament that morning to meet Health Secretary Sajid Javid to raise his constituents’ concerns. He also met Television presenter Davina McCall to discuss her campaign and welcome her to Westminster.

At the end of the debate, the Government announced changes to how HRT will be prescribed: instead of paying for a repeat prescription every month or every three months, the prescriber can issue a batch of prescriptions for up to 12 months with one signature and one prescription charge. The prescriber will set the interval between the issues of the medicine and the number of times the prescription can be repeated, and of course this will be done on clinical grounds. Repeatable prescriptions can be issued either electronically or on paper.

In real terms, this will mean that, where clinically appropriate, one prescription charge can be paid per year. For example, where a woman currently takes two hormone treatments, oestrogen and progesterone, and receives a repeatable prescription every month, she pays £18.70 each time, which makes a total of £224 every year. Under the changed system, she would pay just £18.70 each year. That is a saving of £205. For a woman currently prescribed HRT on a three-monthly interval, moving to a 12-monthly repeatable prescription will make a saving of £66 a year.

Tom said: “All women will go through the menopause, though their experiences of the process will vary. I recognise that there can be a significant cost to HRT and I welcome these changes, which will make a real difference to women in Gedling.”