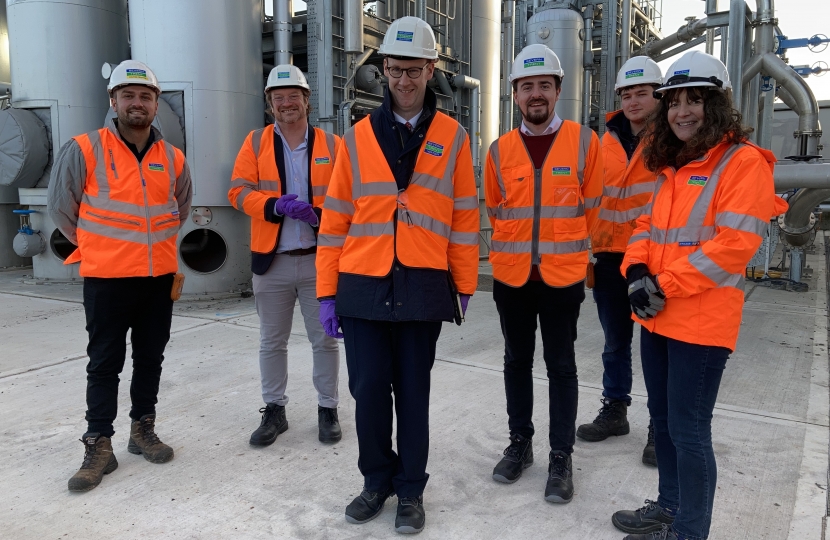 Severn Trent welcomed Tom Randall, MP for Gedling to a sewage treatment works in Nottinghamshire recently, to learn about how the company is using cutting-edge technology to recycle waste into green energy.

The Gedling MP, who was joined by two local councillors, was given a personal tour of the works near the village of Stoke Bardolph, following a major investment at the site, which now boasts a brand-new Thermal Hydrolysis Plant (THP) – allowing teams to convert sewage into green gas and electricity more efficiently.

The new plant, which is part of a wider £45m investment at the site, sits alongside a gas-to-grid facility, which will help to decarbonise the region’s gas supply.

This major upgrade, coupled with other renewable generation sources at the Stoke Bardolph site, including wind turbines, solar panels and a crop conversion plant, means the amount of green energy generated there is enough to power over 22,000 homes for a year.

Tom Randall, MP for Gedling, commented: “I’d like to thank the team at Severn Trent for hosting me at their sewage treatment works at Stoke Bardolph. It’s been fascinating to learn about their renewable energy projects and the investment they’ve made, as they continue on their net zero journey.”

Leah Fry, Head of Bioresources at Severn Trent was part of the team that hosted Tom. She added:

“It was a pleasure to welcome Tom to our sewage treatment works in Stoke Bardolph and bring him up to speed on all the investments we’ve made recently to help us achieve our green goals for the future.

“The new technology we’ve got in place here means we’re able to treat waste more efficiently than ever before, while decarbonising the local gas network for homes and businesses in the area.”

Severn Trent now has four THPs located at different treatment works across the Midlands, which will play a major role in helping the company to achieve its triple carbon pledge of reaching net zero carbon emissions, using 100% renewable energy and having a fleet of vehicles that are entirely electric by 2030.