How a Law is made 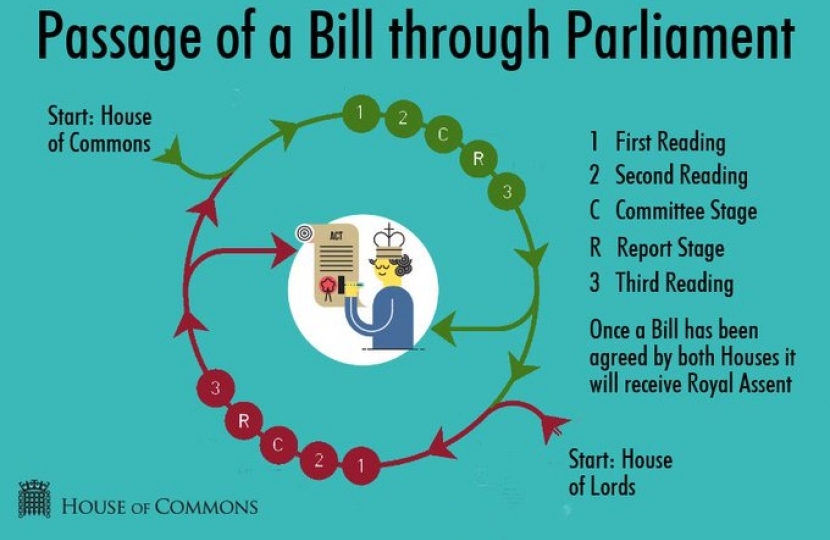 What is a Bill?

Before a Law is made it is called a Bill. A Bill must pass through several stages within Parliament before it can become a Law. This is to make sure there is enough time to discuss a Bill and make sure that it is fit for purpose.

Who decides if a law is passed?

There are three bodies that oversee the law making process. These are; the House of Commons, the House of Lords, and the Crown.

The House of Commons

This is where MPs like me go to discuss and vote on bills and decide if they can move on to the next stage of the process. This can often take a lot of discussion as there are lots of different types of bills, on lots of different topics, that have big impacts for our region and our country. There are 649 other Members of Parliament as well as me who have been elected debate these bills on behalf of their constituencies and suggest and vote changes to bills that will make sure the bill will do what It was brought into to do.

The House of Lords

This is a body made up of experts in numerous topics from across the country and different sectors who also discuss the bills and add their knowledge and expertise to the bill. They can then recommend changes to the bill before it goes back to the House of Commons to be voted on.

Once a bill has passed through both houses it is given the seal of approval by the Queen. This is called 'Royal Assent'.

Find out more about how laws in the United Kingdom are made in this useful video, or find more information at via the Parliament UK website.