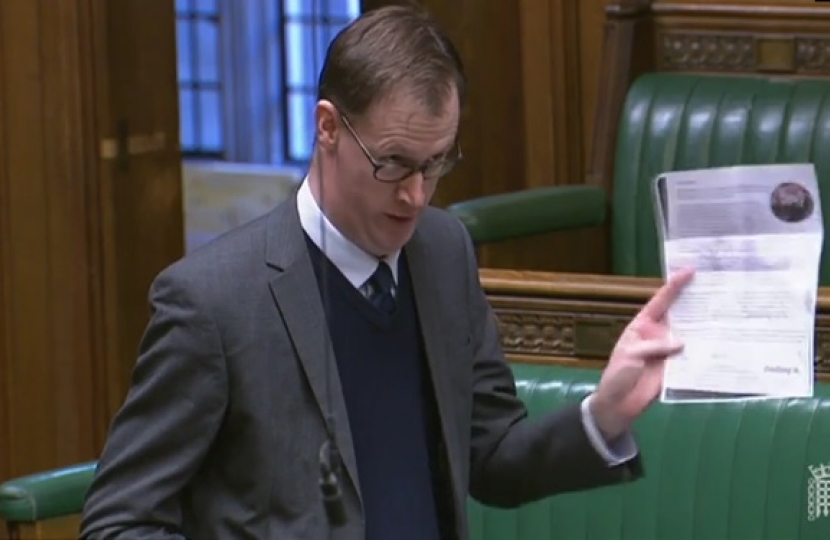 During Business Questions today, Gedling’s Conservative Member of Parliament Tom Randall said: “Gedling Borough residents are opening their council tax bills to find a letter, signed by the Leader and Deputy Leader, criticising the government, including that the borough has not received levelling up funding. But at a meeting I had with Department for Levelling-Up officials this week, I learned that Gedling’s levelling up fund bid was described as disparate and insufficiently compelling, feedback that the council would’ve had when they prepared their letter.”

Tom went on to ask the Leader of the House of Commons for advice on how best to raise this issue in this House and said: “Gedling Borough's leaders' time would be better spent working on better bids, rather than churning out taxpayer-funded propaganda.”

Leader of the House of Commons and fellow Gedling Borough MP, Rt Honourable Mark Spencer MP, replied: “I share his pain in that Gedling Borough Council covers part of my constituency as well. He is right to draw the House’s attention to this.

This intervention follows a meeting Tom Randall MP held on Tuesday with the Minister for Levelling Up, together with officials from his department, to discuss Gedling Borough Council’s levelling-up fund bid and understand why it failed and what needs to be done to ensure that any bid succeeded next time.

Speaking after Business Questions, Tom said, “Levelling up Gedling is my number one priority as it will create more local jobs and improve our communities, but I am disappointed Gedling Borough Council’s funding bid failed.

“To secure investment into Gedling, it is vital that the Council listen and act upon funding bid feedback. Gedling Borough Council received feedback on their levelling-up bid from the Government assessors back in December. I have written to the Council’s Chief Executive today to highlight the key points that I gleaned from my meeting with the Minister for Levelling Up and asked how the Council intends to incorporate this feedback into your future bids.

“I would not have made this feedback public, or raised it in the House of Commons, but I felt compelled to speak out after Gedling Borough Council’s political leadership tried to use the levelling up fund as a stick to beat the Government with in the letter they sent to all Gedling households at taxpayers' expense.

“I will continue to do all I can to ensure communities across Gedling receive the investment they deserve. Yesterday, the Government announced the details of Round 2 of the Levelling Up Fund and I look forward to supporting Gedling’s bid.”