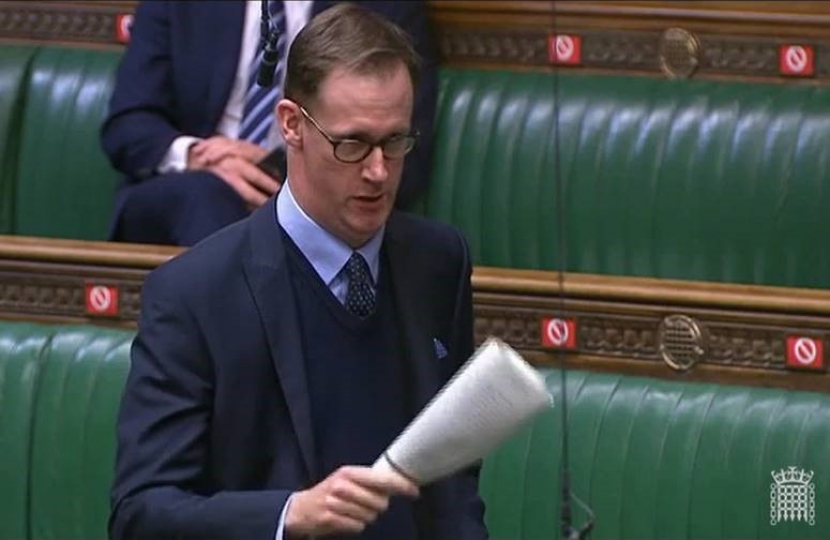 During an Urgent Question to the Department for International Trade regarding the proposed trade agreement between the UK and Australia, the Minister for Trade Policy, Greg Hands MP, confirmed that that there will be no compromise on UK standards of animal welfare, food safety and the environment.

The Minister for Trade Policy, Greg Hands MP said; “The Australian lamb and beef coming into the market today meets our standards. There will be no change as a result of the free trade agreement to our standards. Australian beef and lamb will continue to have to meet our import standards.”

During questions to the Trade Minister on Thursday, Gedling’s Tom Randall MP said: “The deep historical relationship that we have with Australia is perhaps exemplified by the fact that [the Speaker’s] Chair is a gift from Australia.”

Tom went on to ask the Trade Minister: “Does [the Minister for Trade Policy] agree that this agreement is an opportunity to deepen the relationship with our kith and kin in Australia and should be celebrated and championed and not denigrated?”

“We have an incredibly strong and close relationship with Australia. It is not just about family and kinship; it runs across defence, security, culture and sport, and also trade. Australia is a major country when it comes to promoting global free trade. That is exactly the right place for this country to be in as well.”

Commenting after, Tom said: “Last week, Labour’s Shadow Trade Secretary brought an Urgent Question to the House of Commons, making several critical remarks about the proposed trade agreement between the UK and Australia.

“Answering questions, the Minister for Trade Policy, Greg Hands MP, emphasised the opportunities that a deal could bring. A deal with Australia is a gateway into the Comprehensive and Progressive Agreement for Trans-Pacific Partnership, which has some of the world's fastest-growing markets.

“Currently, Australia sells 75% of its beef and 70% of its lamb to Asia and there is a big opportunity here for British agriculture.

“I believe that a free trade agreement with Australia is also an opportunity to forge even deeper links with a country with which we have close ties, a point I raised with the minister.”

Another productive week in Parliament and working across Gedling. My work included:

Speaking with the Principal of Arnold Hill Academy