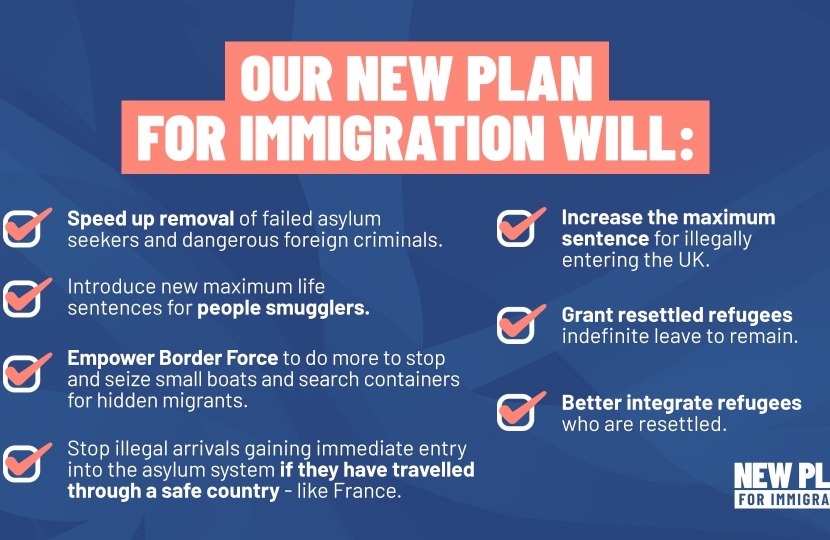 Today, the Home Secretary will launch the New Plan for Immigration to properly control our borders.

Now we have taken back control of our legal immigration system by ending free movement and introducing a new points-based system, we must address the challenge of illegal immigration in order to properly control our borders and prevent further loss of life in the Channel and elsewhere.

I know how frustrated Gedling residents are about small boats coming to the UK. The current system is collapsing under the pressures of illegal routes to asylum, facilitated by criminals smuggling people into the UK and too often resulting in the loss of life. At the heart of the New Plan for Immigration is a simple principle: fairness. Access to the UK’s asylum system should be based on need, not on the ability to pay people smugglers.

To support those in genuine need via safe & legal routes.

To break the life-threatening business of criminal people smugglers.

To make it easier to remove illegal arrivals with no right to be here.

The New Plan for Immigration will ensure that these perilous and illegal journeys to the UK via safe countries in which people should and could have claimed asylum are no longer worth the risk, whilst ensuring the world’s most vulnerable can still seek refuge.

Last week, Parliament was on Easter recess and I spent it working in Gedling. My work included:

Chatting to Burton Joyce residents about the A612 and speeding.