Pay rise for 188,000 workers across the East Midlands 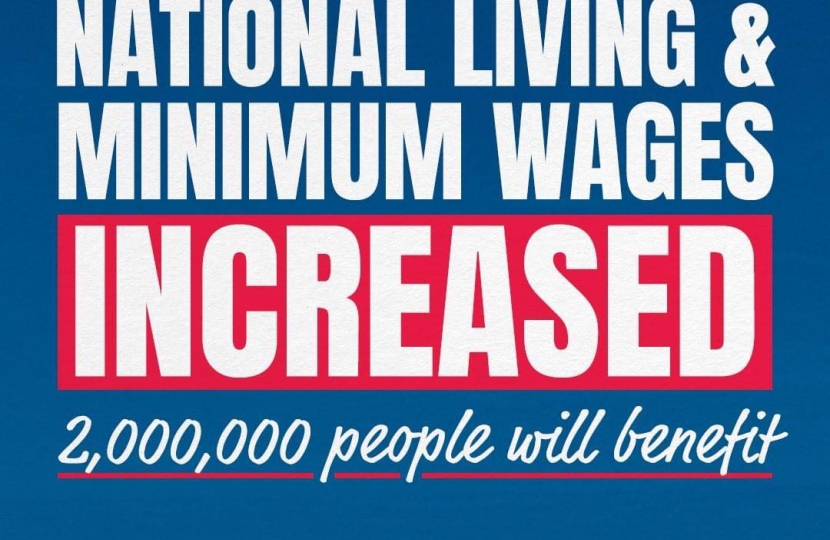 Last week, our Conservative Government increased the National Living Wage to £8.91 an hour – an above inflation pay rise equivalent to £345 extra per year for someone working full-time – and the Government are lowering the age eligibility to 23 years old, meaning more than 2 million people will get a pay rise.

188,000 workers across the East Midlands have received a pay increase this year thanks to increases to the National Living Wage and National Minimum Wage brought in by the Conservative Government.

The rate rises include a 2.2 per cent increase in the National Living Wage to £8.91, the equivalent of more than £345 extra per year for someone working full-time.

And for the first time since it came into effect in 2016, more younger people will be eligible for the National Living Wage, as the age threshold will be lowered from 25 to 23 years old.

The rise means someone working full time on the National Living Wage from April 2021 will be taking home £5,400 more annually than they were in 2010.

The Conservative Government remains committed to the target of the National Living Wage reaching two-thirds of median earnings by 2024, and this increase allows progress to continue to be made towards it.

Other rate increases include:

These pay increases builds on the unprecedented support the Conservative Government has delivered to protect jobs and livelihoods through the pandemic, including protecting 11.2 million jobs through the furlough scheme, £18.9 billion to support 2.7 million self-employed workers to date, and billions of pounds in tax deferrals and grants for businesses.

Last month’s Budget also introduced new measures to cut down on the cost of living by freezing fuel duty for the eleventh consecutive year - saving an average car driver £12.84 per tank and a cumulative £1,600, and freezing all alcohol duties, saving drinkers £1.7 billion.

Commenting, Gedling MP Tom Randall said: "This has been an extraordinarily difficult year for workers across Gedling, but as we recover from the pandemic, this Conservative Government is determined to put more money into the pockets of our lowest-paid workers.

"These increases to the National Living and Minimum Wages will benefit around 188,000 people across the East Midlands, giving them a much needed pay rise as we steadily re-open the economy and get more people back to work.

"This will help to protect the lowest paid and put more money in the pockets of hard-working families– supporting Gedling’s recovery as we build back better from this pandemic."

Prime Minister Boris Johnson said: “The National Minimum and Living Wages have increased every year since they were introduced, supporting the lowest paid, and despite the challenges we’ve faced recently, this year will be no different.

“That’s why we’re providing a well-earned pay rise to two million people, which will be a welcome boost to families right across the UK.

“To make sure the next generation isn’t left behind, everyone over 23 years old will also now be eligible.”

Business Secretary Kwasi Kwarteng said: “In this toughest of years, we’re protecting workers by putting more money in the pockets of the UK’s lowest paid.

“To support our next generation of workers, we’ve also lowered the age threshold for the Living Wage to 23 - ensuring even more people have the security of a decent wage.

“This increase will help millions of families in every corner of the country, while supporting businesses as we prepare to safely reopen our economy and build back better from the pandemic.

“I’d urge all workers to check their pay packet to ensure they’re getting what they are entitled to, and remind employers of their duty to pay the correct wage.”

QUEEN'S SPEECH - SAFE STREETS FOR ALL

Last week, the Queen's Speech contained a number of legislative measures that will help to make the streets across Gedling safer.

I welcomed these during a debate on this part of the Queen's Speech yesterday and paid tribute to the great work Gedling Police are doing.