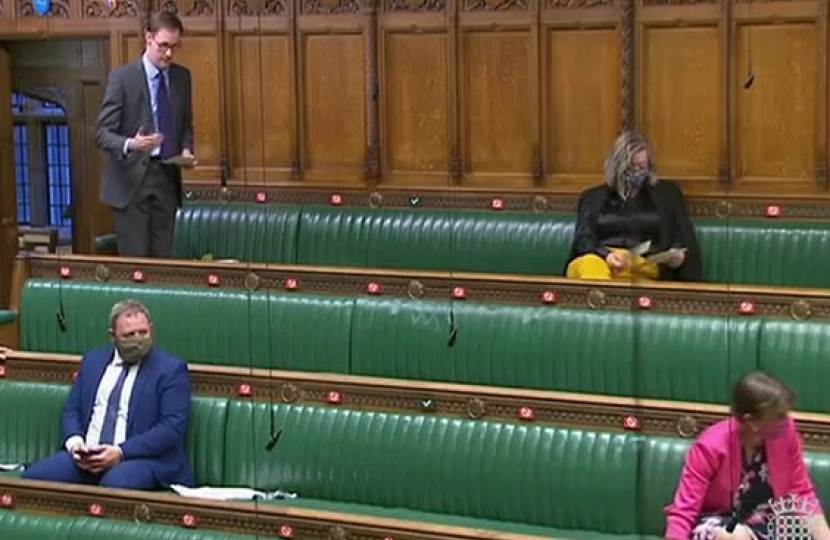 Tom Randall MP has spoken up about local residents’ fears about pet theft in a parliamentary debate.

Tom was speaking in the Report Stage of the Police, Crime, Sentencing and Courts Bill in the House of Commons as parliament considered several proposed amendments, including one about a new offence of pet theft.

Tom said: “There has been a lot of organised criminality around the reported rise in pet theft, and I have seen videos posted in local community Facebook groups that show groups of suspicious-looking men looking for dogs. Constituents have written to me to say how scared or worried they are when they go out to walk their dog during the day.”

The Government launched a Pet Theft Taskforce in May, to look into this issue, which Tom believes should be allowed to complete its work:

“I…believe that legislating now would ignore the work of the pet theft taskforce, which was launched in May. It will try to understand the factors behind the perceived rise in pet theft, recommend measures to tackle that and seek to learn the lessons from related specific thefts, including of mobile phones and metal.”

“We have heard some powerful arguments for tackling the issue. There is more to be done and primary legislation might well be necessary, but I would first like to see the outcome of the taskforce’s review and, if measures are necessary, for that to be backed up with appropriate sentencing.”

Tom also praised the work of Nottinghamshire Police in taking a lead on this issue: “I commend Nottinghamshire police for the appointment of Chief Inspector Amy Styles-Jones as a dog theft lead. I think it may be the first police force that has taken that step and it could be a model for others to follow. It will provide some reassurance to the public.”

The Pet Theft Taskforce will report in the autumn.

Gedling’s MP, Tom Randall, has welcomed the announcement that Arnold Hill Academy and Redhill Academy are among the 2,820 secondary schools across England that will be hosting a summer school over the school holidays, as part of the Conservative Government’s £200 million Summer School programme.